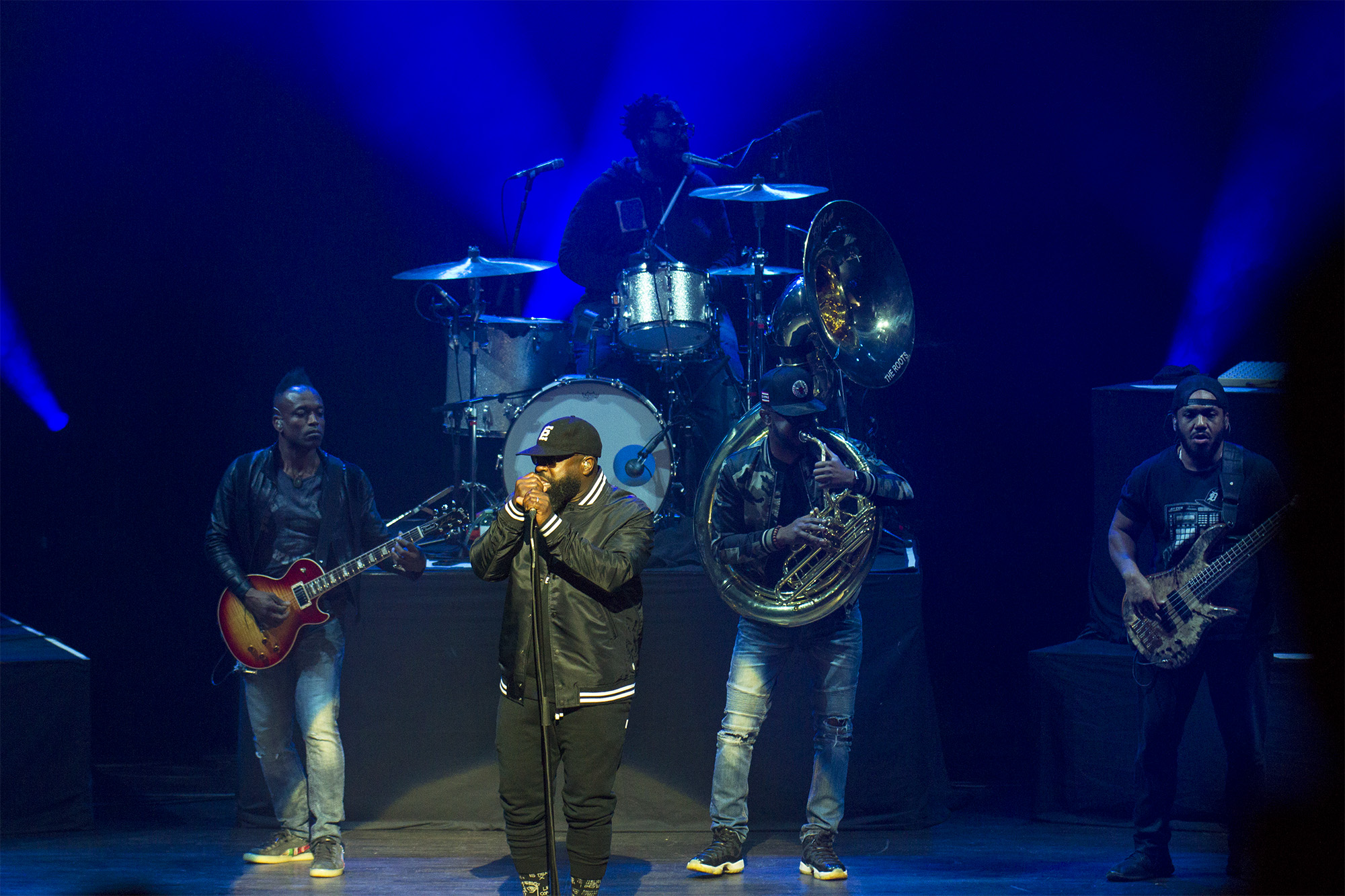 The start of the Canada Day long weekend was welcomed in by none other than arguably Hip Hop’s greatest band of all time, Philadelphia’s own The Roots. The 10 piece band founded by Ahmir “Questlove” Thompson and Tariq “Black Thought” Trotter in 1987, absolutely rocked the house at Queen Elizabeth theatre for the annual TD Vancouver International Jazz Festival.

The show started off with a brief solo opening by Jeremy Ellis, who took us on a journey through his MPC as he looped various samples and drum beats live. Heavy 808’s and up tempo battle break rhythms fused beautifully into Latin and Caribbean inspired vocals and melody’s. An engaging and fun segment to get the evening started as people settled into their seats. 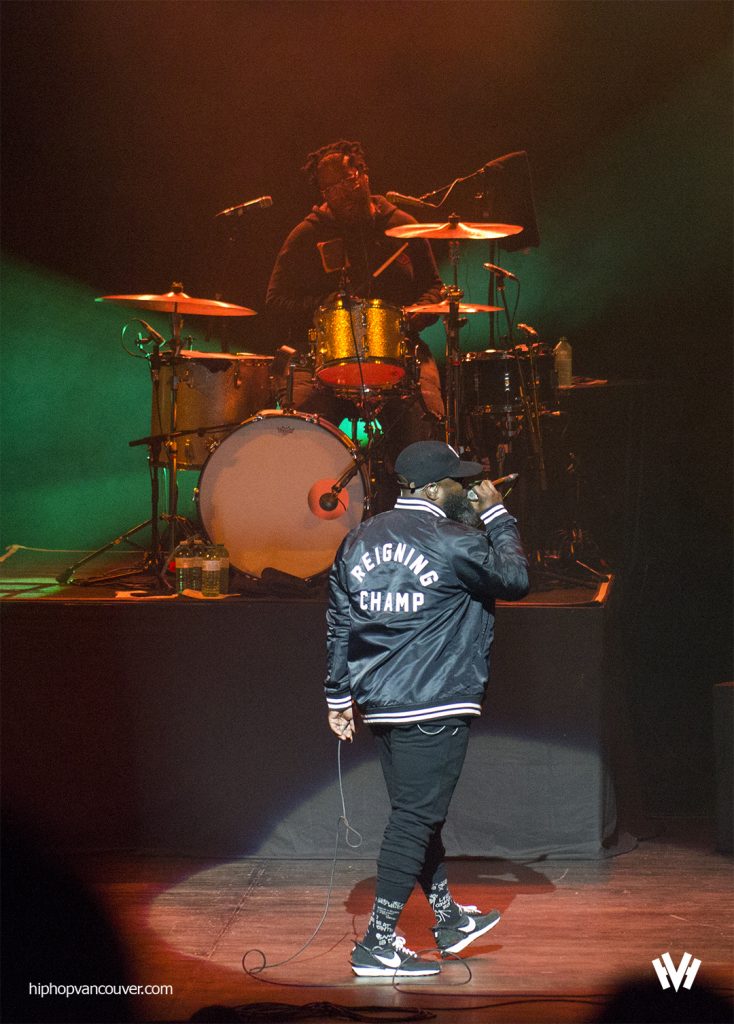 Immediately as the remaining 9 members took the stage, the audience rose to their feet and gave an enthusiastic show of appreciation. Black Thought simply acknowledged the applause with a simple salute and wave, and before we knew it The Roots were all together delivering “The Next Movement” as their first song of the evening.

Following this was a solo by Mark Kelly on bass guitar, which ended up being the first of many solo’s that each member of the band would showcase. It was clear right off the jump that this wasn’t going to be your average rap show. That point was made apparent not only by the sheer professionalism that The Roots embody, but also by the vast range in demographics of the audience in attendance. As I looked around I smiled when I could see people in their early 20’s next to elders and older folks who could have easily been their parent’s age. All coming together to enjoy a live Hip Hop show.

The sound on this night was immaculate, which I know was something that fans who attended Wu-Tang days prior at this same venue were frustrated with. The Roots had seamless transitions that would go from more recognizable songs such as ‘Here I Come’, ‘Web’ and ‘As I Proceed’, then into interludes of freestyle jam sessions where everyone would just flex and get loose.

Something that makes The Roots extra unique is their ability and willingness to do cover songs. Much like any band, The Roots are influenced by other music and artists themselves and it showed when they covered Main Source’s “Looking At The Front Door”. This would be the start of a string of Hip Hop covers that mashed through such classics as T.I. “What You Know”, ATCQ “I Left My Wallet in El Segundo”, Lil Wayne “A Milli”, Jay-Z “Big Pimpin’, Wu-Tang “C.R.E.A.M.”, Arrested Development “Everyday People”, Big Pun “Still Not a Player”, Gangstarr “Mass Appeal”, Mobb Deep “Shook Ones”, Pharcyde “Running Away”, Black Sheep “The Choice Is Yours” and Ol’ Dirty Bastard “Shimmy Shimmy Ya”. 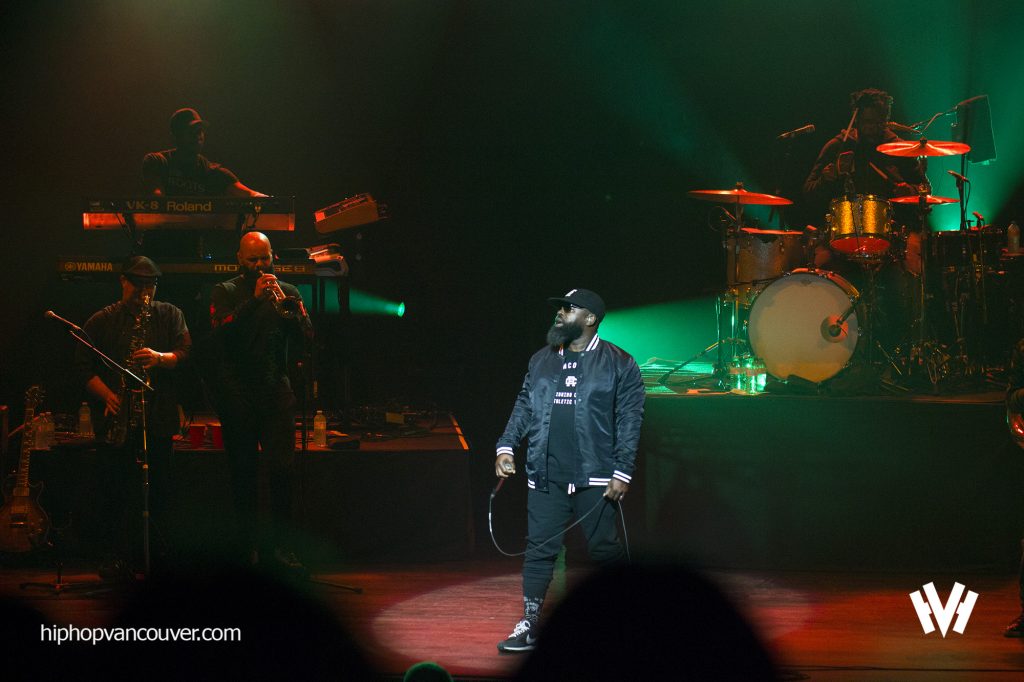 More impressive solos would take place as Damon “Tuba Gooding Jr.” Bryson showed us just how cold he is on that tuba all while expressing a fun, childlike humor to his performance. Kamal Gray, who’s been down with The Roots since the early days, laced a smooth showcase on the keyboard, while Stro Elliot impressed us by singlehandedly smashing through a percussion session that included synthesised electric bongo drums. However the most impressive solo for me on this night was by Captain Kirk Douglas on lead guitar. Shortly after BT and Questlove had a brief freestyle session together, Kirk ripped through a wild solo that left jaws wide open and was as rock star worthy as any head banger legend would do. At times he would scat in unison with his guitar and while also including small riffs to hint at songs such as Dr Dre’s -‘Xxplosive’, Outkast’s – ‘Spottieottiedopalicious’ and Lil Nas X – ‘Old Town Road’. 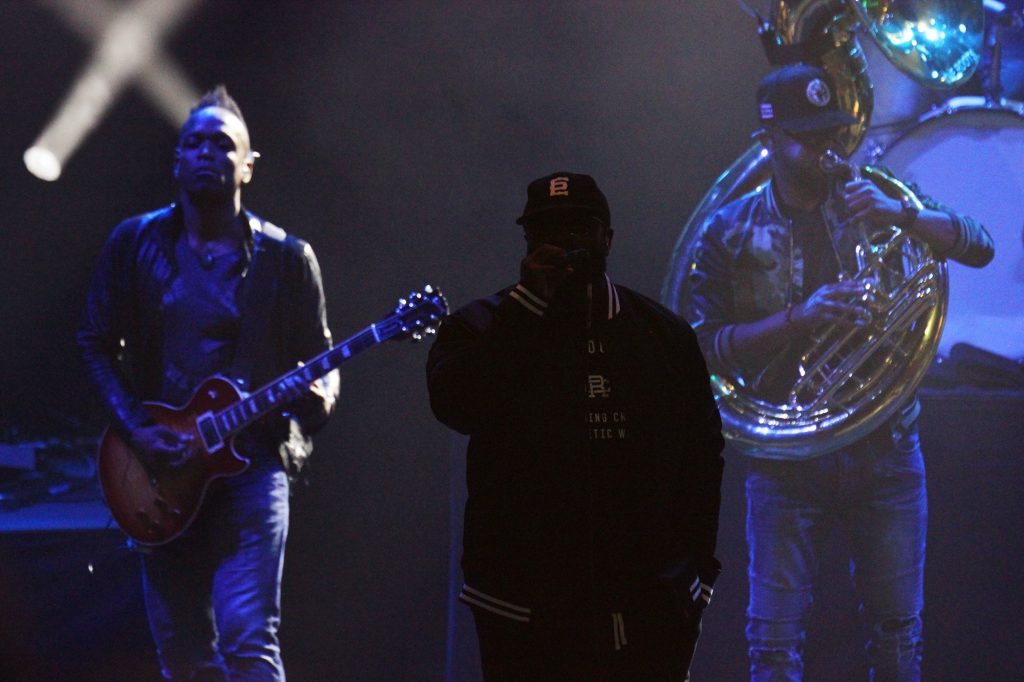 Not to leave fans without the classics, The Roots delivered such fan favourite joint as “You Got Me” (Ft. Erykah Badu) and “The Seeds 2.0”, which also included a cover of Curtis Mayfield’s “Moving On Up”. Other highlights for me was being able to witness and appreciate just how amazing of a rapper/frontman Black Thought truly is. Many people have him in their lists of being one of the best rappers to ever exist and now that I’ve seen him live, I can see why that is. His voice is an instrument all on its own and his breathe control is some of the best I’ve ever heard. He can easily blackout and rap for what seems like forever, all while staying completely in the pocket and never overshadowing his bandmates.

The Roots are a well-oiled machine of seasoned musical veterans. Not only did they crush every aspect of this particular performance without skipping a beat, it’s important to also keep in mind that these professionals literally flew across the country from New York to Vancouver hours earlier after filming The Tonight Show with Jimmy Fallen.

When it was all said and done, the audience all gave a boisterous standing ovation and The Roots bowed and waved goodbye, as they quietly exited the stage without the need for an encore.

Thanks to Coastal Jazz for having us out. To learn more about Coastal Jazz and the Jazz Festival, visit: https://www.coastaljazz.ca/