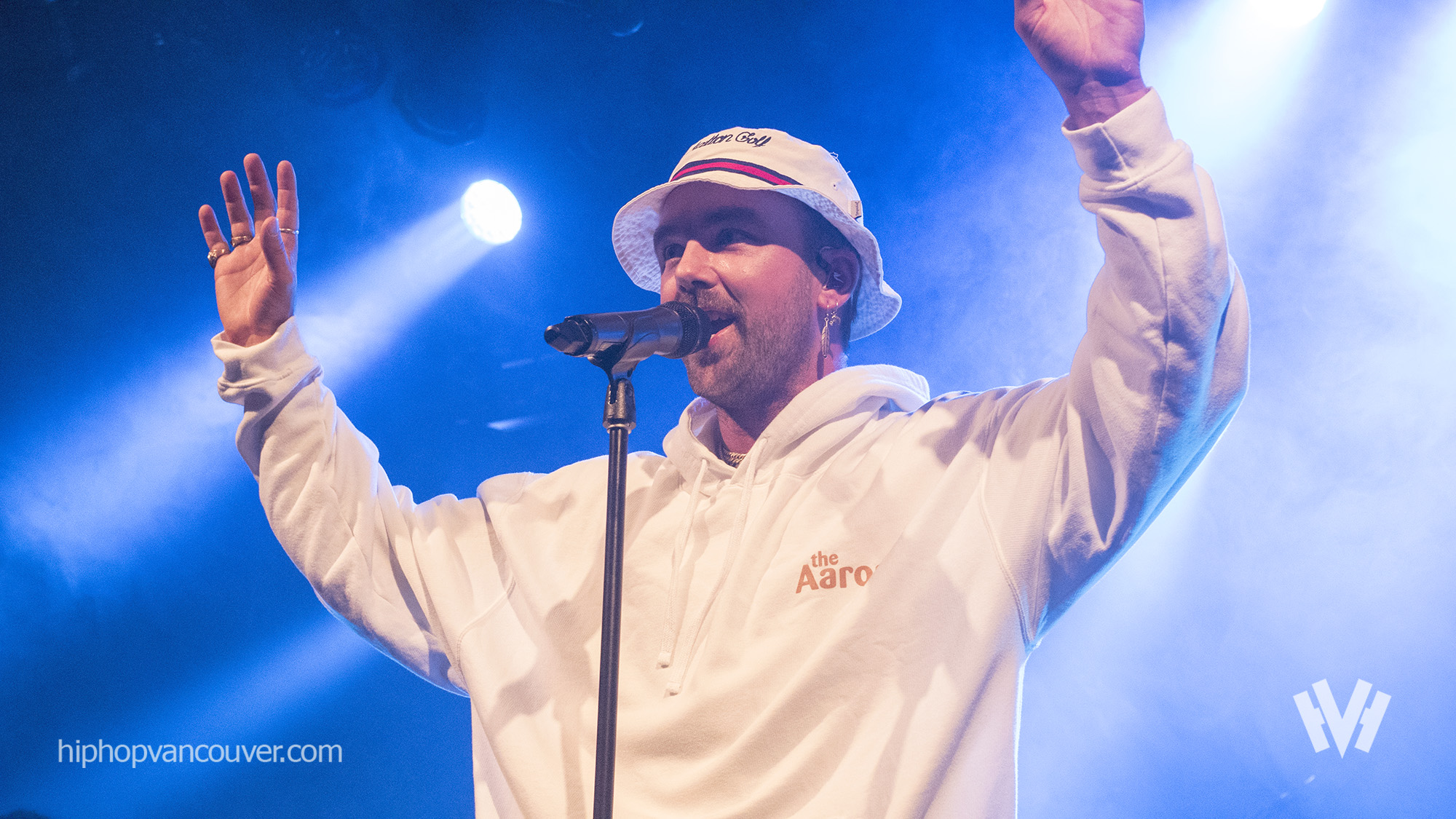 Wild dancing, diversity, a nice change of pace and for some of us, dream’s coming true. That basically sums up the night for you.

Last Friday I took the expo down to the acclaimed ‘Commodore Ballroom’ on Granville St. to hit up SonReal’s return to Vancouver, BC. This was also one of the last shows on his tour list in North America, plus he did drop some Instagram posts about how he always wanted to perform there since he was 15. So based off that, I could only assume that this show was definitely going to bang out.

By the time I arrived it was about 10:00 pm, I was concerned because that only gave me so many seconds before I could rush the stage and catch as much of the show as possible. As I barge in and almost ruin a gleeful, dance mob of 18-year old girls, the situation came to some what of a trade-off. DJ Rich-A, his main tour DJ, had managed to push time back by electrifying the sold out venue through his usual quality mix of hip-hop classics & trap remixes. I began wandering around to see where I could get the greatest angles for the night, just for the sake of viewing all the performers as a whole (including his band). Every single table was full, upstairs and downstairs. It made me smile to see the fact that so many people of various ages and musical tastes were all able to mend together in one venue. I could hear rock, Top 40 and underground rap fans saying they love SonReal. Now that is rare, especially in Vancouver, BC for a local artist.

10:11, the amount of technical difficulties seemed to increase. I know I wasn’t the only one who noticed, as the crowd continued to scream “AARON!”, “AARON!”, every time the song faded. They weren’t upset at all though and continued to dance like no one in that 995 person ballroom was there. There was a lot of chatter and at this point there were definitely a lot more men and women in their late 20’s/ 30’s coming to the center. It just goes to show that while Aaron may have been pushing for a youthful audience, his music is still enjoyed by many ages. About 10 minutes later, the patient crowd began to slowly clap in such a respectful way as water bottles were being placed on stage. Basically, what that means is they could sense that the energy was about to rise. 10:32, Band members walk on stage and play in the sudden dramatic switch of display lights. The man of the hour, SonReal followed after them and jumped right in to character. His opening song; ‘Fearless’ set fire to the crowd. The crowd was screaming their vocal chords out, singing along and throwing their hands back and forth to the beat. One thing I love about SonReal is just how naturally in sync he is whenever he hits the stage, and he can dive right in to his bag real fast! It was literally like 15 seconds, followed by “Hi, I’m SonReal”, *opening speech* and ba-bam, his vocals were solid. I honestly couldn’t tell too much of a difference between the mastered version of the song, just because of how well he’s got his notes on lock. Aaron was wearing some signature light-denim, some fresh red and white Asics, and a throwback Canucks jersey just for the hometown crowd. 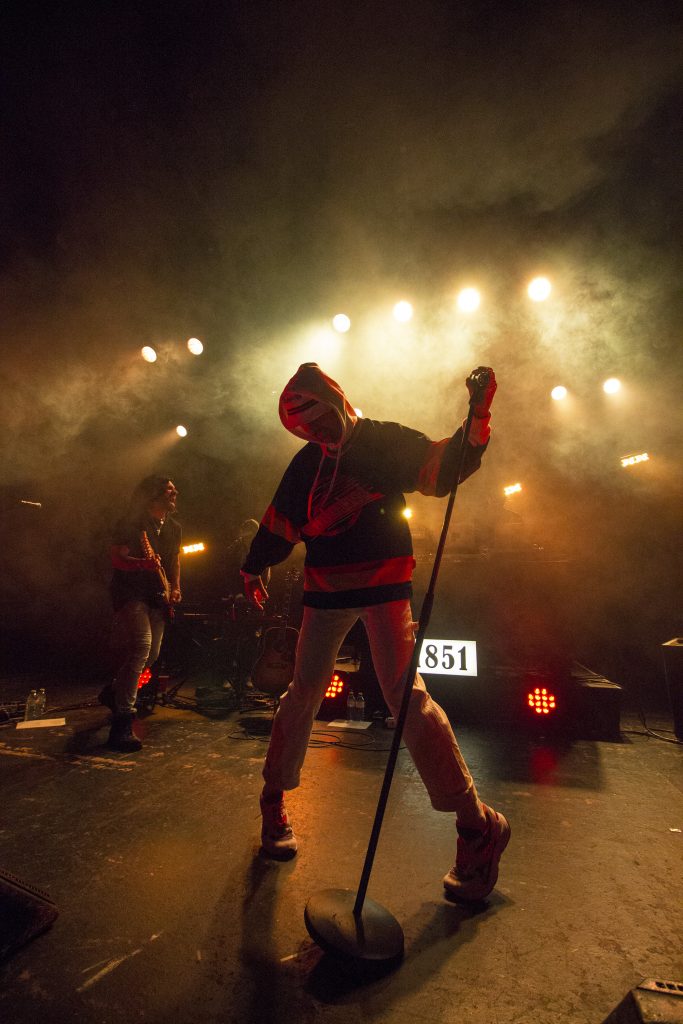 Shout out to the lighting technicians, who clearly knew how to spotlight the drummer, keyboardist and guitar player at the right time. That added a real nice touch to the performance. The next couple songs up were all well known radio-hits off ‘The Aaron LP’, which included Dive Bar (a great choice to follow up on, full of punch and crowd antics), 1000 Highways, Ted and Healing ft. Jessie Reyez. SonReal even sang Jessie’s part well while rushing in to the crowd for some more reaction. Switching the energy from high to low, he captured everyone with his own creative pitch control. Oh and by the way, his drummer was killing it with the transitions from drum breaks to slower-paced beats at the moment. He ended off performing his whole new album (minus ‘Last Year’) along with one of his viral classics: ‘No Warm Up’. This was probably his most theatrical performance of the night so far. I’m talking Elvis moves, headbanging, mic bending. But I do say, that jump he did off of the Drummer’s stage-level to end the song off was ‘pre ighttt’.

Up next, Aaron brought the crowd to silence to speak about the importance of mental health awareness and how it effects us all. Everyone in the venue applauded with claps and whistles. And what a great way to jump from there into his next track: ‘Have A Nice Day’. This one was playfully giddy and full of leaps and spins. His opening bars may have been delivered poorly but his animated antics and crowd control were enough to save him. ‘Problems’ followed up, this brought the crowd back from random chattering in the corners to waving their hands back and fourth. SonReal told the crowd that they should either be quite, wave or sing-along to this next one as it meant a lot to him. ‘My Friend’ which is probably one of SonReal’s most interpersonal songs brought a sense of seriousness to the setting. This number was probably his bands standout performance of the night as the melodies and harmonies of the keyboardist and guitar player mixed well with SonReal’s acoustic guitar playing and the drums. His falsetto vocals were sharp and articulate as the whole crowd was in sync with him. While this was happening, I was sitting up top to view the whole front crowd. I remember hearing a lot of people shouting ‘excellent’ as the song finished. And with a strong kick to breakthrough the silence, his 2015 hit ‘Can I Get a Witness’ let off with a bang. Many people began dancing to this one, whether in couples or circles. The fog-lights were now focused on SonReal, followed by tropical colours and island sounds. ‘Quit’ was something a lot different from the usual SonReal. In the words of himself, ‘my fan’s love me regardless’. That being if he were to switch his style or not. While his band may have been killing this one, SonReal opened with more falsetto melodies, but his voice became difficult to hear around the end. I guess it was a smart time to take a quick breather. 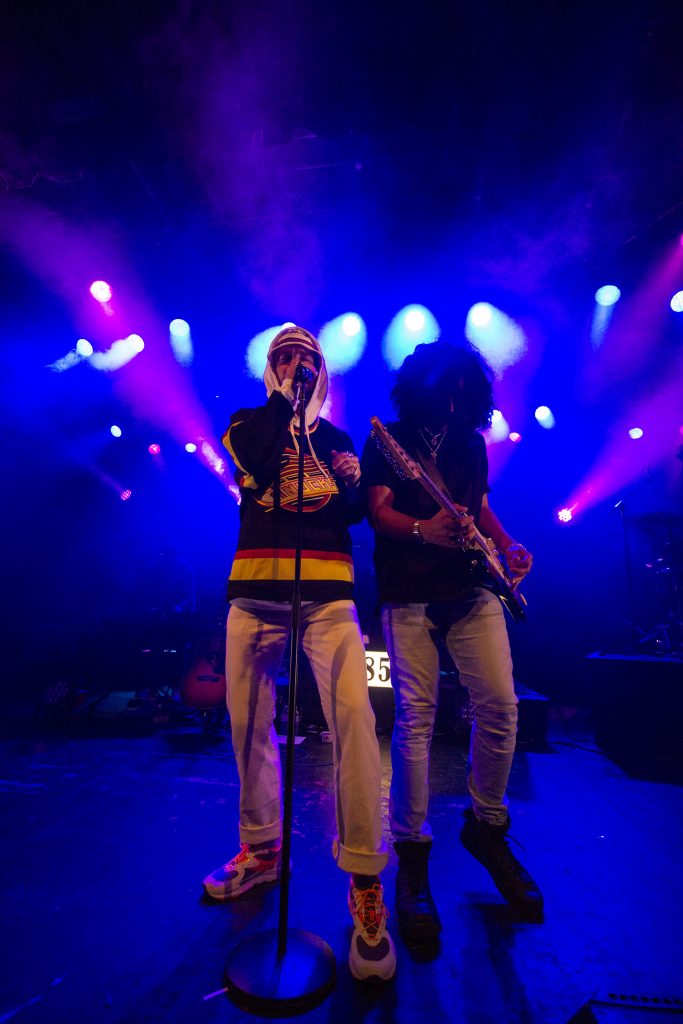 Just as he did over Instagram, Aaron made the bold move to pull out his phone and let everyone know that he is giving them his actual (temporary) number hehehe. He stated he will try and answer as many texts as he possibly can. It seems like he really knows how to read the crowd and respond back, when they show how supportive they are. All hands back in the air for two more classic SonReal songs. ‘Everywhere We Go’ and ‘Repo Man’ also started out very solid but by the end you could clearly tell that Aaron was getting tired of throwing his arms and swinging all over the place. He ended on somewhat of a smooth note as he brought himself back to the center stage and focused on eye contact and delivery again. DJ Rich-A caught a nice wave of awe’s from the crowd after Aaron told him how much he appreciates their tour conversations while tired.

Finally at the credits, SonReal began to thank everyone who was involved with his tour from his management team to his tour band as they layed down some nice groovy ska melodies. It was a heartwarming moment for any day one SonReal fan. He even gave a straight-forward mini performance dedicated to women in the heat of the moment (smart move dude). Regardless of whether that was planned or not, it was a real mellow end to a night full of high energy. To finish it all off, he hits the crowd with ‘Heart’ and ‘Preach’, some nice chopper-flow bars in between as well. The crowd begins to clap, applaud and chant as SonReal thanks us all for being there as the band slowly leaves the stage.

The night was swell, full of laughs, cheers and thank you’s with a little sprinkle of awareness in between. I’m sure everyone left satisfied. I swear, this guy is just clever with when to give speeches. I had no problem with the crowd that night, they were all respectable, bar was on point, sound system never failed and of course, the performance was spectacular.

Stay tuned and make sure to follow hiphopvancouver.com for event recaps, local music, photos and more! 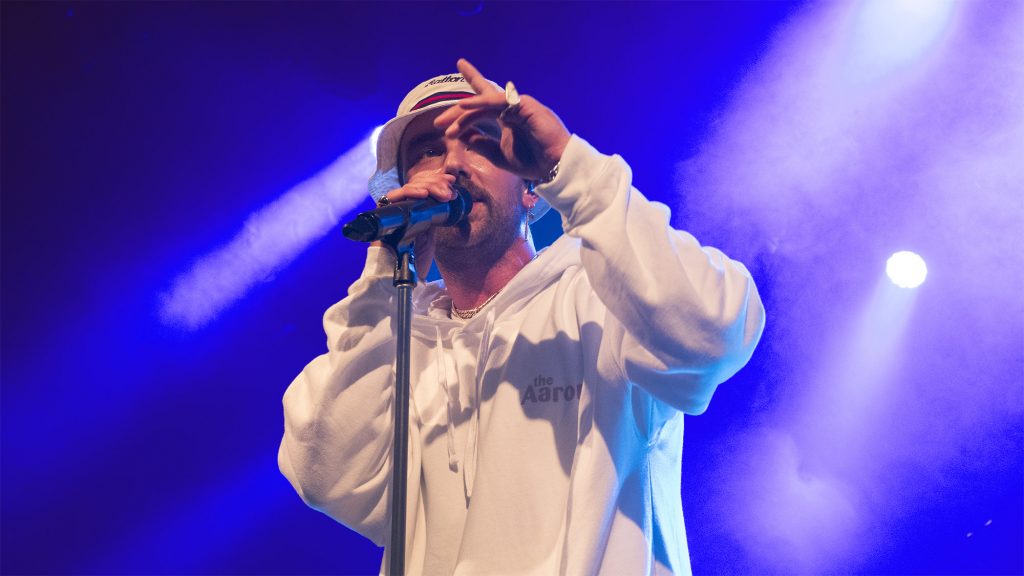