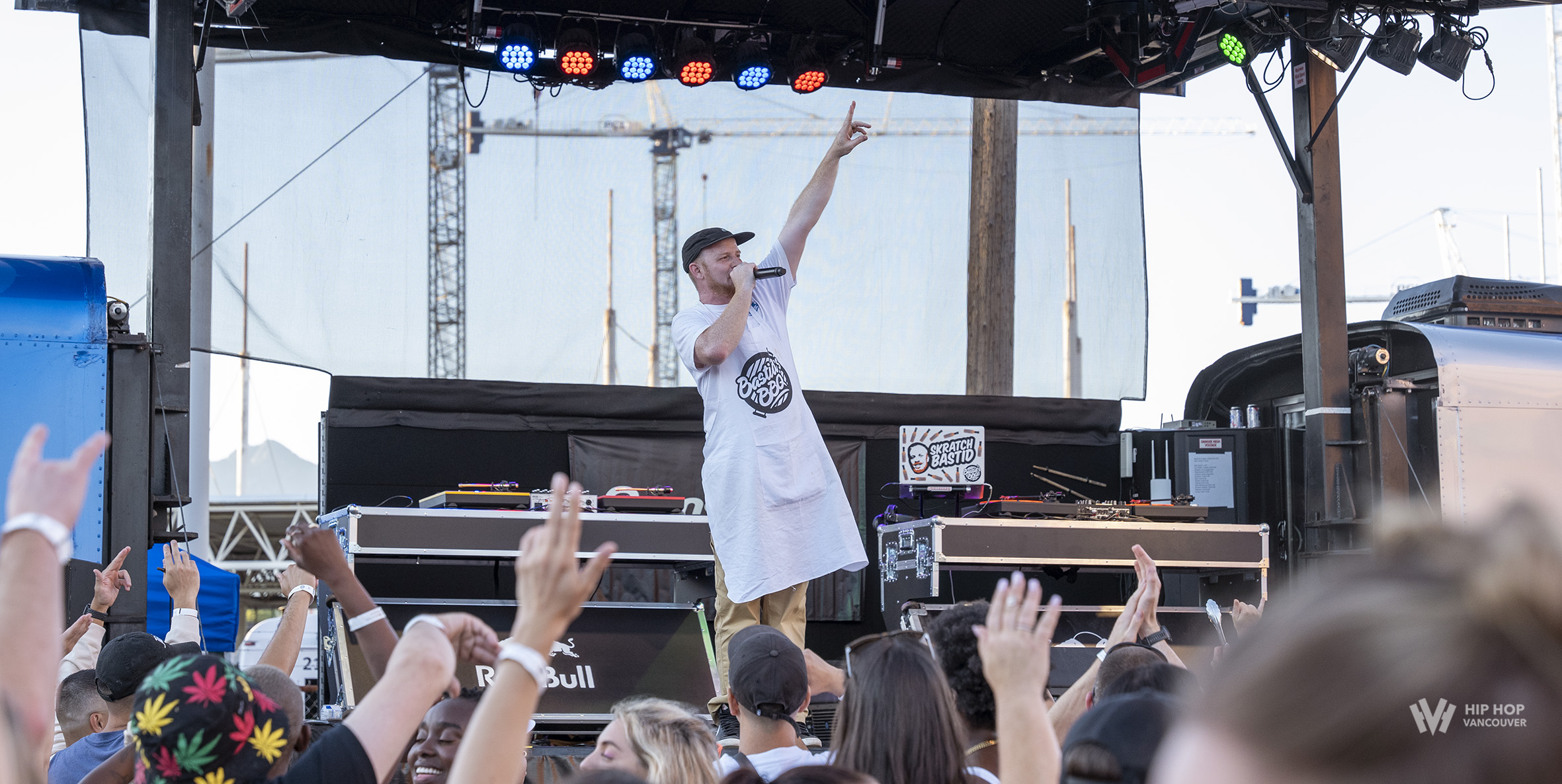 One of Canada’s most revered and talented DJ’s, also happens to be one of the nicest and most accessible people in the industry. He smashes every live set he does, whether on stage at a festival, or streaming over his popular Twitch channel. He tours relentlessly and works tirelessly, and even when he’s done his required performance duties he often makes himself available to watch other DJ’s perform and mingle with friends and fans while rocking one of the friendliest and most welcoming smiles I’ve ever seen on a human being.

Skratch Bastid is rooted in the elements of Hip Hop and you can see it oozing out of him not only in his unique style of DJing, but also in how he curates his parties, most notably the annual “Bastid BBQ”. This year in Vancouver was no different, as Skratch put together a familiar lineup of our city’s best DJ’s including Kilo Cee, Waxxfanatic, Charlie Hustle, Des, Floetic, DJ Kookum, Flipout, and Nina Mendoza.

As always the element of breakdancing was represented as various BBoys and BGirls braved the hot, unrelenting sun and took to the floor to throw down. The only real change in the format to the event was the location, as it switched from The Waldorf where it had been for the past six years (not including Covid years), to 295 Terminal Ave. As with any change there will be occasional growing pains, and while overall I enjoyed the shift in venue space, some more shade over the dancefloor and maybe some astroturf laid out for dancing, would have made the sun more bearable to deal with.

Once the sun dipped behind the mountain range, everything became a lot more comfortable and almost immediately we were blessed with a reunion show of sorts from Vancity’s pioneering legendary rap group, The Rascalz crew. Red-1, Misfit and Dedos (minus DJ Kemo as he had personal obligations he was tending to) took the stage to perform their classic hits like Soul Obligation, Movie Star, Dreaded Fist, Crazy World and Top of the World. Of course they also performed Northern Touch with help from longtime Vancouver collaborators Checkmate and Concise. I honestly can’t remember the last time I saw the Rascalz all together like that, but even after not performing on stage as an entire collective in years, they didn’t miss a step and brought back all of those great nostalgic feels that we needed.

Headlining and closing out the party was none other than the Miami Turntabalist legend himself, DJ Craze. Now we here at HHV have a special relationship with Craze as we interviewed him at Shambhala in 2017 and I can say honestly that he’s in my top 5 DJ’s of all time. With that said, this wasn’t my favourite set I’ve seen from Craze. Some of the mixes were bang on like when he blended Wu-Tang’s “C.R.E.A.M” with Drake’s “Pound Cake”, but other mixes like Phaorahe Monch’s “Simon Says” into MOP’s “Ante Up”, were low hanging fruit and too basic to be something I’d expect from a world class DJ like Craze. With that said, a dope highlight from Craze was when he and Skratch Bastid went back to back, taking turns cutting it up on the decks.. that was hype and really made you aware of just how mega talented these guys are.

Props to Skartch Bastid for all of the work and energy he pours into these events and ensuring that local DJ’s, dancers, performers, and food vendors all get some shine. These gatherings are special as they bring the Hip Hop community in Vancouver together to celebrate the culture in honest and genuine ways. Thanks Skratch Bastid and Siegel Entertainment for having us out. Until next year… Peace!