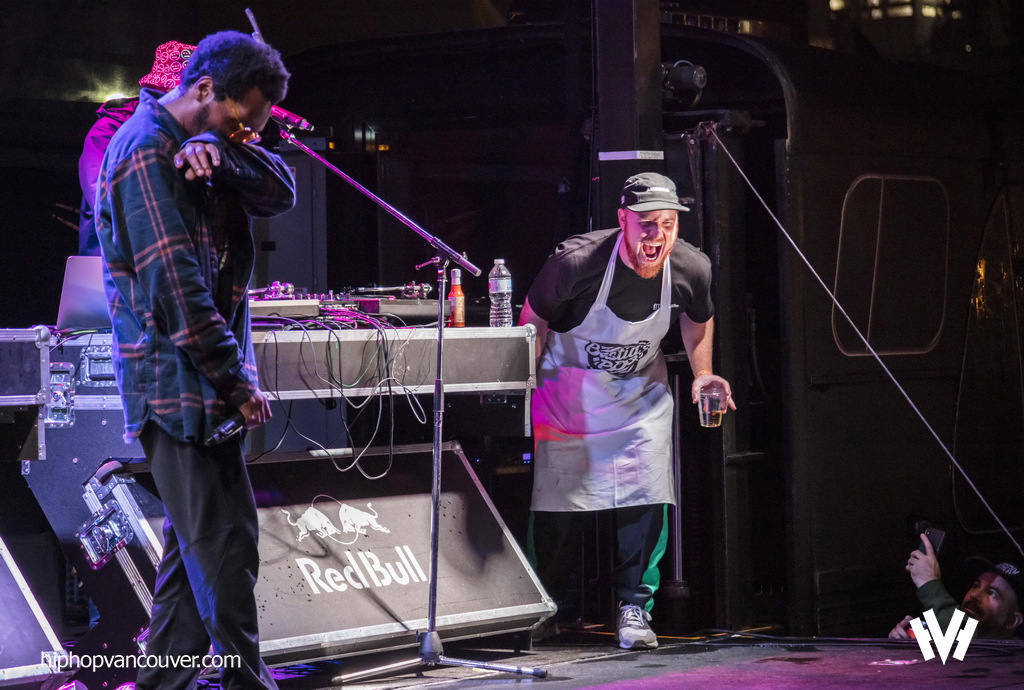 Gathering for the annual Bastid’s BBQ at the parking lot of the Waldorf Hotel is becoming a familiar way to celebrate the end of the summer season in Vancouver. Curated by none other than Nova Scotia’s own, Skratch Bastid, the event is branded and designed to pay homage to barbecued foods, community gatherings and classic era hip-hop.

Taking place in mid-late September for the past four years, Bastid’s BBQ has had a successful track record of landing on days which have produced quality weather. However Raincouver held up to its name on this day and began with a steady spit that lasted into the early evening, putting a literal damper of the summer bbq vibes that Bastid was attempting to create. 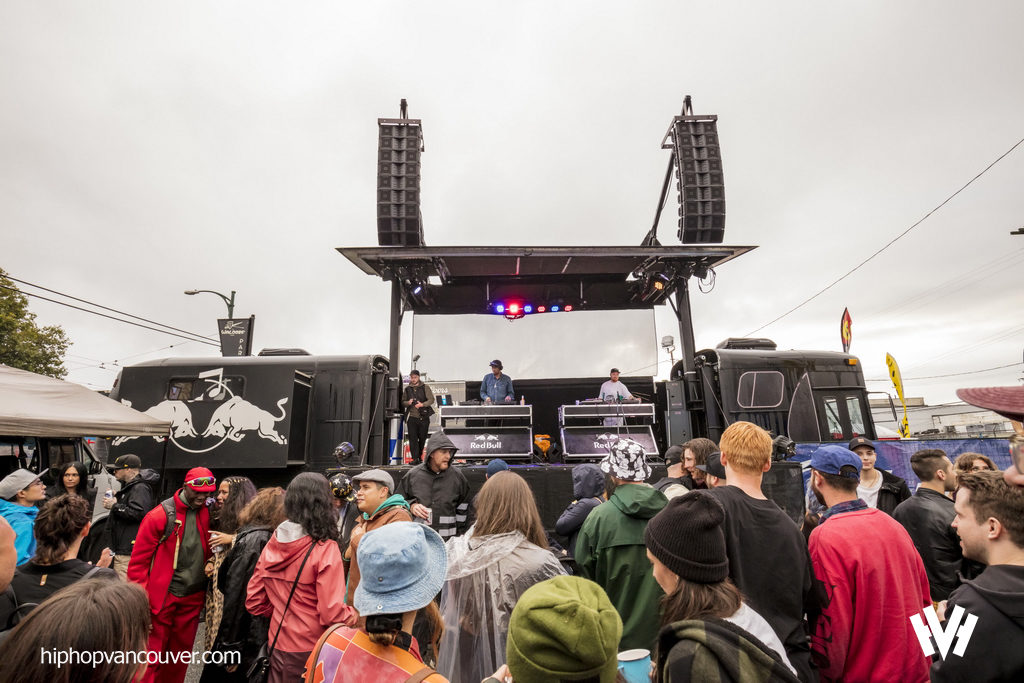 Yet as we all know, rain is not something new here in Vancouver and a little shower wasn’t going to keep the hip hop heads away from attending for long. While it may have washed away some of the breakdancers from getting loose, the umbrellas and raincoats that filled the outdoor dance space were short lived, as the rain dissipated and we ended up having a sunny evening after all. 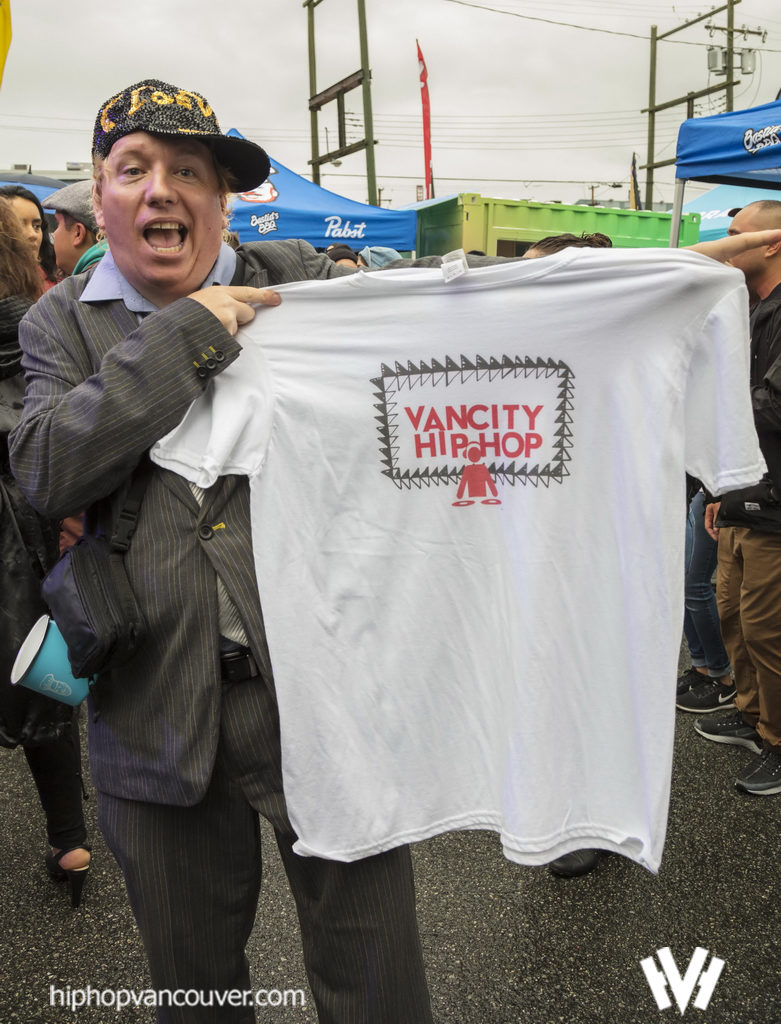 Rich Medina (Philly, PA) was on decks spinning soulful and nostalgic tunes that warmed our spirits, all while Skratch Bastid hosted the show with his classic ear to ear grin. Being live at the bbq and all, I had to help myself to a slow cooked brisket sandwich which was layered on a soft baguette with pickles, peppers and onions. The only bummer was the lineup for drinks became increasingly long with little end in sight, making a refreshing bevy to wash my sandwich down nearly impossible.

Murs was the first rapper to set the night off with a live performance and he comfortably did so, all while wearing no shoes! Performing and introducing songs from his new album, The Iliad Is Dead And The Odyssey (produced by 9th Wonder), Murs bounced and jumped in efforts to bring the energy up and shake us free of our lazy Sunday vibes. He also laced fans with classic Murs joints such as “H-U-S-T-L-E” and “Dirty Girl”.

Bastid’s BBQ is always known for having a golden era rapper/DJ on the bill, (previous years have seen DJ Premier, The Beatnuts, Biz Markie etc.), this year Vancouver was blessed with Del The Funky Homosapien from the Hieroglyphics Crew (Oakland, CA). Del for many of us, myself included, was considered to be one of the best rappers out back in the early-mid 90’s because he resonated so much with how our lifestyles were at those times. Skateboarding, careless partying with the homies and trippy, galactic style backpacker flows was exactly my generations vibes and Del and the Hieroglyphics represented that for heavily for us.

Coming out to stage with a great applause from the audience, Del casually flowed through a set of his top joints while joined by the Hiero backbone himself, Domino. Highlights included solo hitters such as “No Need For Alarm”, “Boo Boo Heads”, and “If You Must”, along with his verse from the notable Hieroglyphics crew cut “You Never Know” and “Virus” from the Deltron 3030 album. Del also took time out to deliver a funky improvised freestyle, which was refreshing to see nowadays when music and live shows can appear overproduced and too polished. 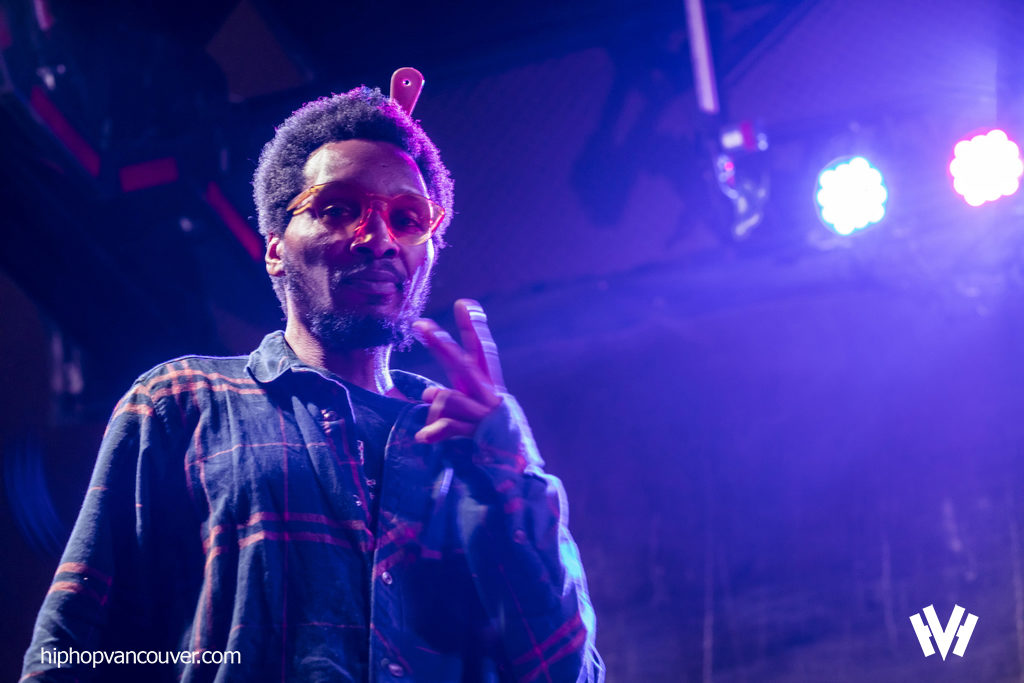 Closing out the night was DJ Nu-Mark aka Uncle Nu who put together a smash hour set that included a well balanced mix of re-edits and juggles, along with skratching samples and vocals into recognizable jams. Nu-mark also played his own standout produced joints with Jurassic 5, Zion I and Slimkid3 (The Pharcyde). Skratch Bastid also hopped up and joined Nu-mark on the decks and exchanged cuts and gems with him, before eventually closing out the show with a salute and gracious thank you for those in attendance.

See you next year!! 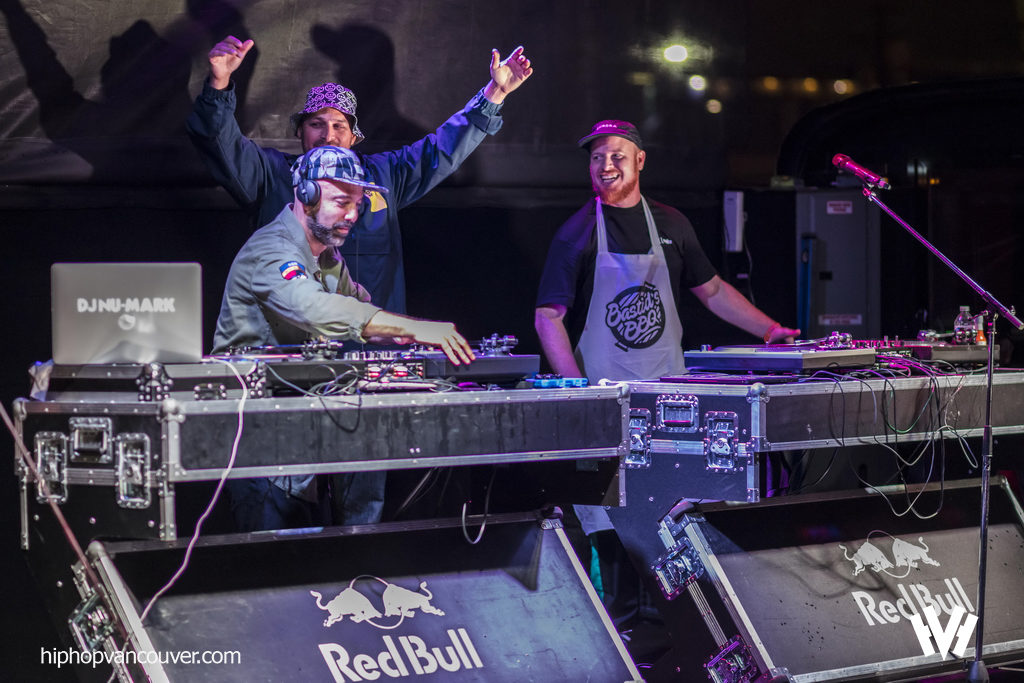